I would love your support!
Posted with love by The Santos Family at 1:33 PM No comments: Links to this post

Email ThisBlogThis!Share to TwitterShare to FacebookShare to Pinterest
Labels: Health

What I'm Learning about Headaches and Vertigo: Part 4

Almost one and a half years ago, I wrote a three part series of blog posts regarding my history with migraines and vertigo.  In the third post, I said:


"It has sent me headlong into a process of learning more about health and wellness, particularly in the area of diet. I'm so excited about what I'm learning and the dietary changes we've begun to instill have already been encouraging. But that journey is a newer one so I'll come back and write about that one when I have more under my belt."

It's time my friends.

Since that third post was written, I stepped into a journey where there would be no turning back.  We began evaluating not only the foods that were clearly causing my issues but also the quality and types of foods we were consuming.  We became convinced that our food, lifestyle, environment, exercise, toxins, and stressors were all affecting our health - either for better or for worse.  We began to transition to a "real food" diet first.  After a while, it became obvious that our family was dealing with several food intolerances as well.  For example, two of our children had regular nose bleeds and another one had periodic eczema.  They all had dry, scaly scalps.  For years we could not pinpoint any reasons why.  After a trial period on a gluten-free diet, the nose bleeds almost completely ceased.  We later learned that corn was also one of their cross-reactive foods (and hence a trigger as well).  Without the gluten and corn, the nosebleeds do not happen and the eczema and scaly scalp is completely non-existent.  I was personally able to finally make the connection of my migraine/vertigo issues with something known as histamine intolerance.  This has continued to rock my world!

As I continued to research, I began learning about something called Functional Medicine.  If you're not familiar with FM, watch the short video below for a great explanation.


I'm not in the current stage of life to go to med school and then be trained as a practitioner (I would do it in a heartbeat if I were).  However, I wanted to learn more and seek a way to help others do the same.  In January, I'm going to begin that journey as I start a year long program to become a Functional Medicine Health Coach through the Functional Medicine Coaching Academy.  I'm extremely excited!  (UPDATE: I completed this program Dec. 2016 and now am a trained coach.)

If you have seemingly disconnected health issues that are affecting your life, don't be satisfied with a "there's nothing that can be done so just take this medicine approach."  Do your research!  Let's live our lives with the fullest potential that we can.  I understand that we may not be able to "fix" all of our problems but we do have the potential to make a significant impact on our quality of life.

In regards to the "Heal Your Headache" book that started my journey.... I still think there are many valuable things to take from the book.  I do think it misses a great deal about the body as a whole, including our overall gut and body health.  One thing to note is that dairy and gluten are not even mentioned as potential food triggers when they most certainly can be.  However, the book was still a helpful piece of my journey.

It's been a crazy few years but much has come out of it.  We continue to learn more about our family's health issues and are pushing forward in getting the help we need.  I hope that you may be motivated to do the same!

***For updates and even more details about where these issues were stemming from, click here.

Posted with love by The Santos Family at 10:13 PM No comments: Links to this post 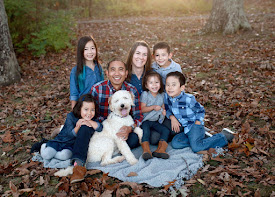